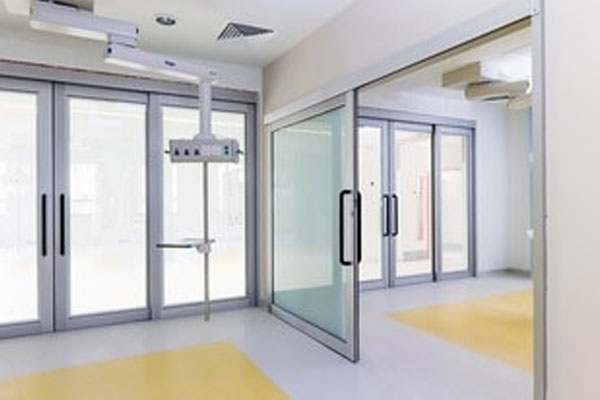 Being admitted to hospital is a daunting prospect for anyone, but for children this is a real ordeal. Parents’ anxiety is passed on to the children and the fear of the unknown and being away from home must all have a negative impact.

When designing the brand new Alder Hey in the Park Children’s Hospital the NHS held one its biggest ever public consultations to listen to what thousands of families thought.

The result is a design inspired by children for children.

The building sits within parkland and children asked for access to the outside and fresh air. They also asked for wards that were more like their bedrooms at home.

The hospital has 75% single rooms with en-suite bathrooms and parent rooms or drop down beds next to the children. The teenagers in particular asked for both privacy and the ability to mix with friends.

These requests for light, space and flexibility have been answered by installing large glazed sliding doors that open up the wall space. Blinds can be closed for extra privacy.

The large sheets of double glazing needed to be thick for the additional strength required for safety and therefore the fabrication of the frames also needed to be robust.

This new door design would obviously be heavy. But the specifications also demanded a low movement force to make the doors light and easy to use for both staff and patients.

Axis Automatic Entrance Systems Limited came to Accuride with a technical brief asking for a door track system that could allow these extra large and heavy doors to slide easily.

Knowing of their experience with slides, we approached Accuride with our dilemma of having to produce a very large manual sliding door weighing up to 180kg with an added brief that it could be easily operated by a small child.

The team at Accuride proposed a solution and we worked closely together to develop suitable components. After a few months of continual development and producing prototypes, we were able to offer our client a product that not only met their design criteria but, in certain aspects, exceeded it. We have now successfully installed 200+ doorsets of various configurations and the feedback received from the client has been exceptional. With Accuride's technical and engineering abilities together with their continual support, the child's dream has become a reality.

Axis has now launched the complete door offereing as Flo-Motion®.

Accuride’s engineering design team had already been working on an aluminium track with recirculating ball carriages and this seemed like a possible solution.

Recirculating ball carriages sit inside an aluminium track and the doors hang off adjustable brackets. By replacing the usual door roller systems, we have lowered the friction on the track.

Using this system, the specification asking for a movement force of under 20N for doors weighing 180kg has been achieved easily.

Dampers have been fitted to the track to stop slamming on both opening and closing.

It’s not just installation that is important; the ability to provide fast on-going maintenance is also important. For example, Axis asked for the carriages to be delivered in 200mm sections of track. It was then a simple matter of butting this up to the ends of the long door track and sliding the carriages along. Carriages and dampers can be removed and replaced using this 200mm section.

The track pelmet or fascia also needed to be moved out of the way during any maintenance periods. A simple design change to the support beam allows the fascia to be lifted and clicked into the horizontal position giving full access to the track and moving parts.

Both Accuride and Axis have hit all the project deadlines for production and installation and Axis has been awarded Laing O’Rourke’s Northern Innovation Award for the Alder Hey door project.

Working in collaboration with an expert in door manufacture and installation has given Accuride’s design engineers a real insight into the problems involved with such large and heavy doors.

‘As an engineer I relish the solving of problems,’ says Peter Bayles, Accuride’s European Director of Engineering, ‘and this particular project was a challenge. Accuride is known as a designer and manufacturer of telescopic slides, so coming up with a linear guide track and movement for sliding doors was a departure for us. However, my product designers are experts in sliding systems and we have been able to take recirculating ball guides and apply them to this application by designing an adjustable bracket to sit between the system and the door.’

As well as now having a solution to sell to other door OEMs, we have been able to develop an off the shelf hardware kit for sale through our distribution partners. The track (DA0116RC) and all parts can be purchased as separate parts for complete flexibility.